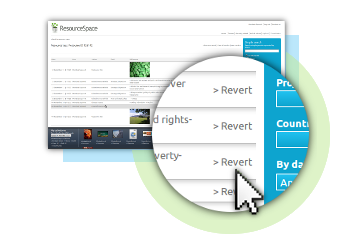 Version control functions are available from within the Resource Log page. The Revert option is found in the tools area and allows you to undo each edit made to the resource metadata individually. It also allows you to revert an upload where a record file has been replaced.

Where the log entry refers to a file replacement upload, the revert action will restore the record to the state it was prior to the action. Again, a confirmation page previews the results of the change.

It is possible to restore a metadata field to an earlier state for an entire collection of resources. Simply select the field on the 'Edit all' screen and choose the option to 'Revert to earlier state' (within the dropdown, after the append / replace options). After selecting this option the system prompts the user to enter a date and time. The batch operation will then restore the field to the state that it was in at the given date / time for each resource in the collection.

From version 9.2 it is possible to revert to an earlier archive state for an entire collection of resources.

Note that reversion operations themselves (both single and batch) are edit actions so will appear in the logs and can thus also be reverted.

Need help? Talk to our expert team     Book a call