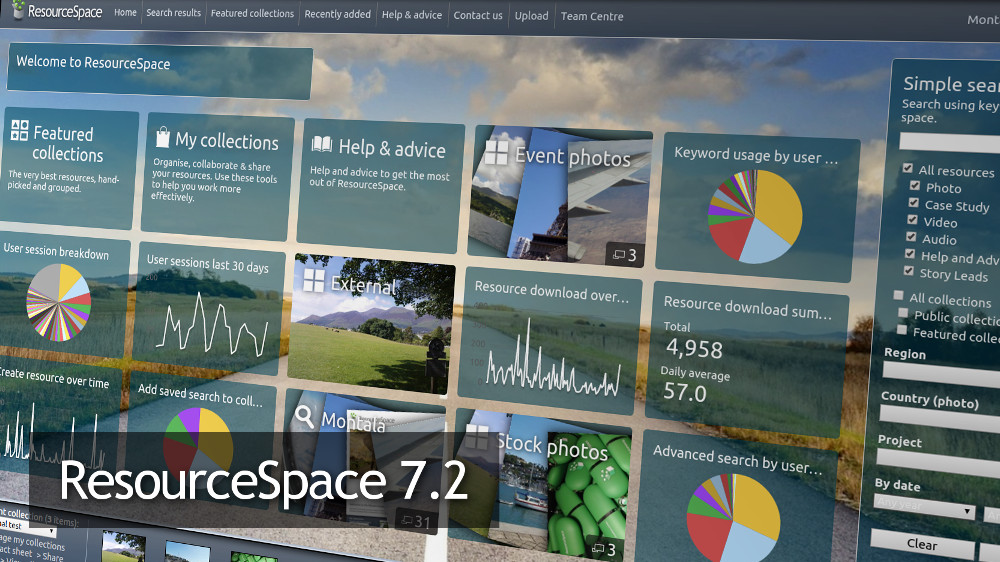 We're pleased to announce the release of ResourceSpace 7.2. This release includes several productivity-boosting user interface enhancements that we're sure you're going to love.

With the new homepage dash functionality users can create their own custom dash tiles that link to frequently used searches, resources and collections. The pluggable architecture allows third party plugins to hook in and create dash tiles also. The Analytics plugin (part of the Enterprise programme) makes use of this to add custom analytics tiles to the dash.

On the subject of Enterprise, the first plugin from that programme is now being made available to everyone in the base. This is the responsive plugin that adds a tailored user interface for mobiles and tablets.

We've improved the drag and drop capabilities and it's now possible to drag resources between the search results and the collections bar. They can also be dragged to a new side bin which mirrors similar functionality on the home page dash.

Other highlights include a new system console allowing monitoring of system CPU, memory and database usage and a Subversion plugin that allows you to update ResourceSpace right from the application itself. There are also numerous updates that improve the stability and security of the software, and a large number of new configuration options allowing you even greater control when customising the software for your needs.

For the full list of updates see the version history.